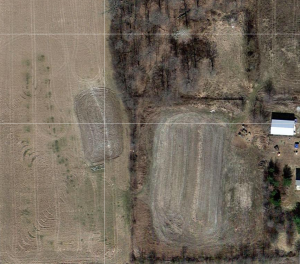 Many times, we do something because we know it’s the right thing to do, even though we don’t get a lot of immediate positive feedback.

I saw the fire ring I set up for cooking down maple syrup. The fence row that is now cleared was not cleared in the picture. I noticed that the chickens were in their winter quarters. The picture is from February or March of this year. If I dug through emails and my calendar, I could probably pin it down to a particular week, or maybe even a specific day. (Of course, the exact date doesn’t matter.)

Among other things, I noticed that the paths our chickens took through the pasture last summer were still very visible.  They’re green!  The entire pasture greens up later in the spring (it’s all very green now), but these images show how our mobile chickens fertilize as they go.  The layers have a less continuous track since they wander around much more. You can see that I plowed up a new vegetable plot on the north half of the area fertilized by the broilers.

Besides being useful for recordkeeping, we now know where to start this year’s chickens.  The north half of the pasture is ready for their attention!

One thought on “Rotational Grazing from Space”

We occasionally send an email newsletter, highlighting produce that we have available and markets that we'll be at. If you'd like to receive the newsletter by email, please sign up!